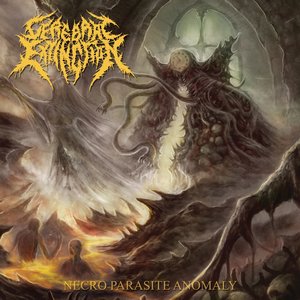 It’s been a good year for Italian death metal. We’ve gotten new Hour of Penance and Hideous Divinity and albums from Bloodtruth and Devangelic await in the future to come. Cerebral Extinction’s second album also awaits in the nearby wings, and packs a brutal punch worthy of inclusion amid all of the rest of the names included above.

Brutal, technically-inclined death metal is served up with the usual ferocity on Necro Parasite Anomaly. The band can burn the gas pedal as well as some of their fellow countrymen and accompany it with some Deeds of Flesh/Suffocation-styled technicality in the riff department, but do like to switch it up on occasion with some respite. The drumming can be particularly frantic at the faster tempos and particularly impressive. Not to take away from the often dizzying riffs that intricately dance at blinding speeds of course, and as a whole it scorches like a comet heading through space. Those earlier mentioned moments of respite do come into play in short waves (see “The End of All Worlds” or “Collision Identity”), but it’s all you need to catch your breath before the next blistering assault comes your way.

One of those albums that’s best viewed in terms of the amount of devastation it leaves in its wake, Necro Parasite Anomaly is an exhilarating rush of brutality and precision musicianship. It’s not out of the usual boundaries of this style, but the take-no-prisoners mentality and sheer force of will it hits you with will be what you remember best. To sum it all up in one word: explosive.