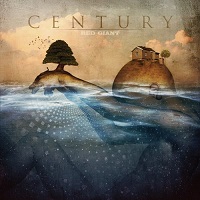 We get it, Century – you’re pissed-off. Blistering gets PO’d too when things go wrong, like when there’s no Mt. Dew in the fridge or the Cleveland Browns decide it’s a good idea to lose teams infinitely less talented than they are. That’s what really gets our goat. As for Century, we’re not quite sure what riles them up, but whatever it is, Red Giant is one heck of an angry record (excuse the triteness). Thank goodness these guys have an outlet in which to vent. Things might get broken.

At any rate, the last anyone heard from Century was with 2008’s Black Ocean, which fared pretty well in critical circuits. It’s easy

to see why these guys are able to land – their metalcore missives aren’t totally misguided, as the rumble and roar of “Oak God” is easy to get behind, minus the silly clean vocals from Candlebox’s Kevin Martin (of all people). Still, it’s singer/founding member/multi-instrumentalist Carson Slovak’s show, with the leather-lunged vocalist exhausting his larynx at any chance he gets, including the Ministry-like “Painting Leprosy” and bouncy “Threats.”

What ultimately staves off Red Giant is how dry musically it is. The preponderance of borrowed Meshuggah riffs and dissonant chords don’t allow for anything else other than a pummel-by-numbers approach. And if one allows it to, the album can drift into that dreaded sphere of mindless noise, even as the band locks into some spazzy portions on “Synapse” or “Dry Bride.”

Slovak’s vocals are the vocal point here and thankfully, he barks his head off enough to rescue Red Giant from metalcore wasteland. Beyond the man’s hellacious roar, there’s little else to get excited…or fired up about.