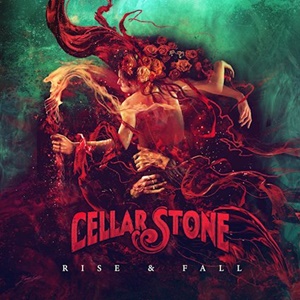 The wealth of material sculpted, molded, and developed into albums during the pandemic reaches historic levels unheard of previously in the industry. Working on the music for the second Cellar Stone album Rise & Fall in a small Greek island village for four months in the spring of 2020, guitarist George Maroulees took the isolation seriously, crafting a lively record that also reflects in the lyrics the anger, frustration, and helplessness going on globally through this unique time. This quartet delivers a bluesy-based heavy rock/metal cocktail that contains the right balance of strong hooks, memorable songs, and versatility track to track to stack well against many of the bigger bands in the genre.

In the pocket interplay from bassist Akis Rooster and drummer George Karlis galvanizes the driving power chords as well as uplifting, catchy transitions – nifty accents allowing “Borrowed Time” and swanky, seductive “War We Can Win” to cement easily into the brain upon initial exposure. When the band wants to be a bit more jagged in terms of aggression and attitude, a song like “Going Under” displays some of their modern metal/ Mastadon-ish affinities – although the chorus has a clear, distinct AOR harmony sheen to counterbalance the main proceedings. Intertwining influences from North America and Europe across the board of the 80’s, 90’s and 2000’s – the band pull from darker alternative / grunge vibes for a ballad like “Save Me” while reaching back into classic heavy rock inspiration for specific riffs, pacing, and tasteful leads/bends during “Storm Is Coming”. It’s also helpful to have a strong set of pipes behind the microphone which Cellar Stone possess through Aris Pirris – he has that connective nature through his range, pitch control, and proper melody placement that rivals a lot of potent American voices.

While not exactly innovative in terms of the style they play, these gentlemen deliver a solid catalog of songs that encourage toe-tapping, fist waving, singing in unison action to all the key parts again and again with Rise & Fall.