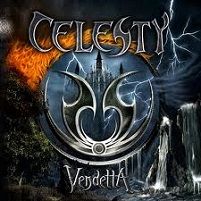 It’s split down the middle: if you’re a Finnish power metal band, you’re going to sound like either Stratovarius or Sonata Arctica. Not like there’s anything inherently wrong with that (is Thunderstone still making albums?), it just puts a cap on creativity. For Celesty, they fall on the Sonata Arctica end and yeah, it doesn’t help that Tony Kakko does guest vocals on this thing. It was nice of him to drop by, actually.

Antti Railio is given some muscular, yet melodic riffing in which to belt over. This is none more evident during “Greed & Vanity,” where the line of “Oh how I hate it when I’m right” has somehow left an indelible mark on this scribe’s brain. “Autumn Leaves” gets the Kakko treatment and is augmented by flowery keyboards and a momentous guitar solo, making it very much Sonata Artica-fied.

In true Finnish power metal fashion, there are lots of pop elements being tossed about. “Feared By Dawn” (which is the heaviest and best jam here) and “New Sin” hold up this end and while they are power metal to the core, they have enough sugary hooks and dramatic pauses to be warranted inclusion for a movie script. It’s Hollywood

Surprisingly, there’s not nearly the glut of pompous Finnish power metal as one would think, so it’s not like Celesty is piling things on. Instead, they’re doing an admirable job of holding up what the predecessors created…nothing new to see here; rather an album very reminiscent of the classic works of the bands

we mentioned from the onset and as you know, you don’t mess with the classics…you merely try to re-create them.