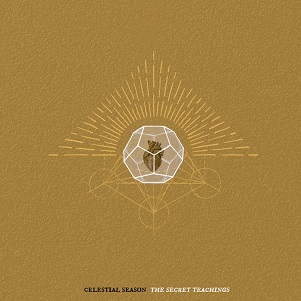 Classic, European doom continues to make the rounds in 2020. It’s important to make the distinction between this doom and that doom only because there’s proper cause for confusion — not all sound like Sabbath or Paradise Lost if you catch our drift. But in the case of reactivated Dutch crew Celestial Season, there’s a concerted effort on their behalf to rediscover their early, acclaimed sound of which falls gently, gracefully under the Euro doom banner. On The Secret Teachings (their first studio album in 20 years), Celestial Season heartedly wander back to a more innocent time.

Stocked with those low, lurching riffs, violin action and gruff, death metal vocals, Celestial Season make a compelling case for Comeback of the Year on album opener “The Secret Teachings of All Ages.” It’s a morose, near-epic that tips the scales in the same manner that My Dying Bride did circa As the Flower Withers, or, naturally, Paradise Lost on Gothic. There are a few variations of this type of song across The Secret Teachings’ running order — “Long Forlorn Tears” gets the nod as the best of the bunch, while “A Veil of Silence” also treads careful Peaceville doom patterns. Celestial Season (who veered off course in the latter part of the 1990s before the split) do, on occasion, suffer from unfocused songwriting — some of these cuts probably could have left off the album (“Salt of the Earth,” “Lunar Child”), but these are minor gripes.

It’s prime-time to be a Euro-tinged doom band. With My Dying Bride and Paradise Lost still operating at a very high level and a batch of would-be upstarts in the wings, a case could be made for the style’s long-forgotten acts, like Celestial Season. The Secret Teachings is cause for celebration…and a look back at their earlier output.