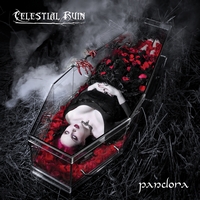 Sometimes getting the female-fronted symphonic metal tag is essentially a kiss of death. The quality (much like in most sub-genres at this point) ranges from fantastic to mediocre, and often it’s hard to weed through the bad to get to the good. But it’s finds like Celestial Ruin that make the dig continually rewarding. This Canadian act is sure to please a wide swath of fans on the melodic front.

Celestial Ruin’s biggest strength is that they do not play into the clichés associated with the genre. In fact, it’s almost a disservice to constrain them to the symphonic metal tag. What you’ll hear over the course of these five tracks often pushes towards power, progressive, and traditional metal as well as some gothic touches. For the most part, the music is upbeat – but never really goes into the cheesy factor. The galloping riffs of “Murder of Crows” is heavy enough to incite some frequent headbanging, as does the near-thrashy verses of “Firestorm.” Some nice leadwork and moving synths (“Nevermore”) also solidifies the band as being more “song-oriented” than just tossing some parts over the vocals. But speaking of which, Larissa Dawn’s vocals carry the necessary power to elevate the band’s status moving forward. There’s a strong sense of power in a song like “Sense of Exile” as well as giving being able to provide the emotive touch, a la “No Quarter.”

Altogether, Pandora comes across as very balanced and grounded. It’s a strong EP that leaves the listener wanting just one or two more tracks. With the right push, Celestial Ruin should have little difficulty convincing the audiences of bands like Within Temptation, Nightwish, or even Evanescence.