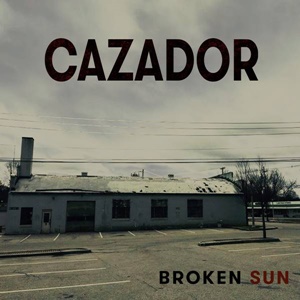 Hailing from the Boston area, Cazador consists of a trio of musicians who believe according to their Facebook page ‘it is better to destroy than to create what is meaningless’. They certainly subscribe to this aural outlook on this five track Broken Sun outing – delivering a bulldozing sludge/doom cocktail that crushes along with dual vocals encompassing a wide array of influences. Their second EP which follows two previous releases (2015’s Deep Stone Crypt EP, plus a Quietus live album last year), it’s exciting to take in another band from an already bountiful New England scene.

Surprisingly keeping their arrangements leaner than most in this genre (only the final cut “Ex Solus” inches near six minutes, with most being around four minutes), the three-piece rarely stay the course in riff/rhythm combinations- experimentation the key to serve up unusual transitions or scream/clean melodies. Many times, the atmosphere can override any semblance of distinctive songwriting – Cazador lean the other direction, which keeps listeners returning to the lurking, behemoth low-tuned action and killer resting heart beat tempo maneuvers for “Red Giant” (think Electric Wizard). Bassist Joe and drummer Cliff trade off plaintive screams and bone-chilling clean melodies – sometimes juxtaposing the use of one or the other when you would least expect it. The groove of the Deftones careens headlong into doom/sludge riffs from Jake on the follow-up “Black Dwarf”, the bass/drum interplay whipping up the nature of subsequent passages to Cave In/Mastadon levels. The analog recording further expands an organic, natural reach for Cazador – it’s always tricky to get studio recordings that can resemble the power of live performances, but Broken Sun replicates much of what one would expect in that setting – intensity, heaviness, despair, a channeling of swirling emotions into kinetic gut-wrenching transformation.

Broken Sun contains enough versatility to appeal to most in the doom/sludge metal scene, while embodying that blue collar/Bostonian work ethic for differentiation.