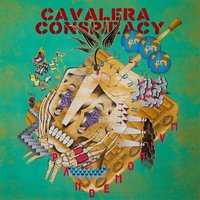 Since just after the end of Blunt Force Trauma’s tour cycle, Cavalera Conspiracy frontman Max Cavalera has voiced his intention to write a brutal, nearly grindcore-style album with brother Iggor that would hearken to the duo’s earliest songwriting days in Sepultura. Three years later, fans can delight in the fact that Max and Iggor have accomplished their goal, dropping a crushing record that calls to fore the whiplash aggression of their youth, through the lens of all their accumulated experience, and that stands as one of the most compelling projects either one of them has been part of.

From the opening surge of “Babylonian Pandemonium” to the pounding inculcation of “Deus Ex Machina,” the record exudes an old-school extreme metal aesthetic that ebbs from death/grind noise to hardcore-tinged pit instigation, and the patented Cavalera groove riffs, while certainly taking a backseat this time around, still…um…arise here and there to punctuate the pervasive chaos and get the heads banging in unison. Max’s vocals are frequently deeper this time around, bringing to mind classic death metal acts like Autopsy and Entombed, while his more-recognizable mid-range still commands tracks like “Bonzai Kamikazee” and “Father of Hate.” Iggor is likewise in great form, delivering a no-frills performance behind the kit that may not be pretty but is boisterous and devastating enough to rouse the dead, an attribute greatly aided by the lo-fi production style that again recalls the glory days of extreme.

Pandemonium maintains a breakneck pace all the way to album closer “Porra,” which is a bit more experimental and mellow but still knows how to get sinister when necessary and serves as a great blowoff to a relentless record. To some, the occasional passage or chord progression may faintly rap on the door of predictability, especially if they’re familiar with the Cavaleras’ previous work, but the blunt and persistent execution doesn’t allow for much reflection on such an issue overall. Decidedly vintage but by no means outdated, Pandemonium serves a drop of sweet savagery that’s sure to sate the ravenous appetites of extreme metal veterans and neophytes alike—phenomenal.