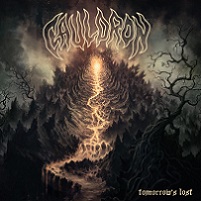 There’s not really much of an excuse for having a poor-sounding album unless it’s recorded in an intentionally poor manner. Or, if you’re still at nascent stage and don’t have any money in the ‘ole band fund. Retro metal winners Cauldron have yet to add sterilized gloss to any one of their three albums, but Tomorrow’s Lost has what should be come to be known as “Fabulous Disaster Disease.” Meaning, it’s not very loud (note: said album by Exodus is notoriously quiet). And metal albums should be loud. Even the crappy ones.

Actually, the mid-tempo approach is what they do best, but the Motorhead/proto thrash shuffle of “End of Time” is cool, in a sort of punk-metal way. As was before, Cauldron aren’t afraid to set the dials back to the mid-80’s for some pure, metal, metal, like on “Nitebreaker,” which is something Armored Saint would give a go, even though John Bush and Cauldron throat Jason Decay couldn’t sound more unlike each other.

A notch below 2009’s Chained to the Nite and 2011’s Burning Fortune, Tomorrow’s Lost isn’t a lost cause (bad pun, oh yeah), yet for their album, one would expect the Canucks to at least kick it up a notch or two. That didn’t happen here…someone turn up the volume too.