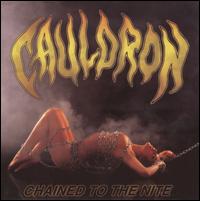 Formed after the demise of Goat Horn (one of Toronto’s most revered metal bands), Cauldron slides ever-so-nicely into the classic metal pantheon.Chained to the Nite takes a nice little side-swipe at someone like a Dokken, perhaps with more gusto. Considering those NWOBHM splices thrown in, this adds up to a very worthwhile, appealing listen.

Vocalist Jason Decay takes a little warming up, as his laid-back, almost unrehearsed/unrefined clean vocals are in direct contrast to the polished, over-the-top stylings of his contemporaries. Decay proves to be an asset throughoutChained to the Nite, though, namely on “Witch Trial” and album closer “Chains Around Heaven.”

The NWOBHM vibe is pervasive, especially on opener “Young and Hungry,” which wouldn’t be out of reach for the Diamond Head’s and Tygers of Pan Tang’s of those days. “Conjure Up the Mass” takes some cues from power metal, slotted nicely in the #2 hole, while the 1-2 punch of “Chained Up In Chains” and “The Leaven/Fermenting Enchantress” provides the definitive album highlights, chalk-full of Maiden-esque melodies and a forceful mid-tempo plunge.

For all of the nostalgia present on Chained to the Nite, there’s some solid songcraft and that’s why we scored it so high. Nothing remotely new (see: Wolf), but executed oh-so perfectly. In earnest, it’s easy to fuck up classic metal, but Cauldron clearly aren’t fuck-ups, rather, a trio of Canucks with a handle on cherished sounds of yore.