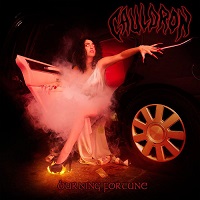 A lot of these fresh throwback metal bands aren’t “faking it” per se, but when stacked up against a band like Cauldron, most of them appear to be severely flawed and in turn, less authentic. When it comes to dissecting Cauldron, it’s all right in front of you – there’s no disguising their affinity for mid-80s metal, which allows them to operate without the guise of pretense. There are love songs on Burning Fortune for chrissakes. No one writes those anymore.

Like 2009’s awesome Chained to the Nite, Burning Fortune is drenched in reverb, with natural, totally-80s tones. The band’s simplistic, yet very melodic and accessible riffs sink their teeth in rather quickly on punchy opener “All or Nothing.” Singer/bassist Jason Decay isn’t going to floor anyone with his vocal delivery, preferring to use the same easy and relaxed delivery on memorable cuts like “Miss You to Death” (complete with crowd participation-ready chorus) and “Queen of Fire.”

Some of the brash nature of NWOBM rears its head on “Breaking Through,” one of the few songs that doesn’t grind away on melody. Yet Burning Fortunetotally clicks when Cauldron immerses itself in the throes of those classic metal chords; just reference “Tears Have Come” (another love song) and Dio-laden “I Confess.”

As noted above, Cauldron is far and away one of the best prospects in the swelling traditional metal field, and Burning Fortune is packed to the gills with catchy and tightly-constructed songs that should stand the test of time, regardless of how dated this sounds. Behind this band we most certainly are, Cauldron should be the leading force on the North American traditional metal scene in no time.