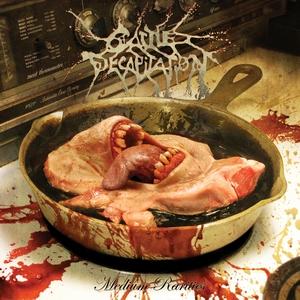 As the cleverly titled name implies, this release from Cattle Decapitation isn’t a new release, but a compilation of rare and demo tracks that chronicle the band’s existence as a whole. The type of stuff that collectors and aficionados will be quite pleased with being able to find quick and available access to. Especially given the rarity that some of these tracks possess.

There’s quite a bit of this release that harkens back to the band’s ‘pure grind’ days, which some may or may not enjoy (the first 15 tracks of the 23 song release rarely make it above the 1-minute mark). But for those who want to hear the band at their most raw, those tracks provide a nice flashback to the band’s beginnings, and it is interesting given the band’s current status, to hear some snippets of what would come later. The last few tracks on the release will make fans of the later day era records a bit more intrigued, as the production values notably increase and the songs are a bit more ‘fleshed out’ than the grind-y days. “An Exposition of Insides,” “No Light and No Life,” and “Cannibalistic Invasivorism” are a nice complementary trio of recent cuts that end the release and serve as evidence of just how much the band has evolved since its early days.

Given the heavy dose of pure grinding on Medium Rarities, this is going to be one that delights long-time fans and collectors more so than the average fan just getting into the band. But for what it is, it’s an enjoyable release that takes the listener on a journey of the band’s evolution through rare cuts that accentuate what the band has always done best – visceral extremity.