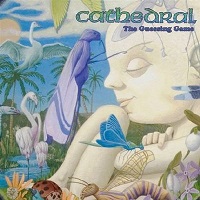 So much for The Garden of Unearthly Delights being the last opus from the long-running quasi-British doomsters. It didn’t feel like the right way to go out anyway…what Cathedral needs is that tried-and-true “last gasp/return to form” album and it’s certainly not going to come in the form of double album The Guessing Game either. As Lee Dorrian and co. gradually get on in years, they become more and more detached from their original doom style, as The Guessing Game peels off more 70’s prog and 60’s British art rock than ever before. All this does is make the 9th album from Cathedral all the more confounding; a “guessing game

The album starts out promisingly enough, with “Funeral of Dreams” packing that hearty punch the band was known for. One could do without the goofy spoken word interludes from Dorrian (they’re a bit flower-powerish), as well as the freelancing chorus on “Painting In the Dark,” which is decidedly not doom-tinged; same for “Cats, Incense, Candles and Wine.” This has been a common thread for Cathedral for years now, although “Edwige’s Eyes” is a call back to the Supernatural Birth Machine days, an underrated album if there ever was one.

“Casket Chasers” retains the knifey boogie and melodic swing of Endtyme, boasting some prime riffage from guitarist Gaz Jennings, while “Running Man” tips the pendulum back into the 60’s pyschedlic direction. Through all of this, Dorrian proves to be the most elusive figure of the bunch. Either he’s whooping it up like he used to post-Forest of Equilibrium or he’s engaging us in cheery, storyteller-like spoken word bits. It all just doesn’t come together.

Cathedral is now very much a polarizing entity, an act while not totally removed from their heralded doom days, is moving in a direction few would have foreseen. Frankly, this album just doesn’t sit right; it’s a bit too congealed, maybe too adventurous and “out there,” even for a band of Cathedral’s stature. Pulling a My Dying Bride and returning to their original style would be a total cop-out at this point. However, no one would call ‘em out for it if they did…