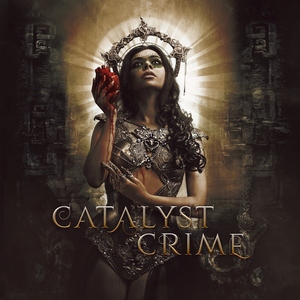 An international assembly of some significant forces within the metal world, Catalyst Crime has been brewing and bubbling up behind the works for the past few years at this point.  With drummer Gerit Lamm (Xandria) and vocalist Zoe Marie Federoff (ex-Insatia) starting off the project, it gained more help from Jonah Weingarten (Pyramaze), along with a few others to round out the line-up.  While Catalyst Crime is firmly rooted in symphonic metal, there’s no denying how genuinely well-built this act is from the ground up.

There’s dime-a-dozen symphonic metal acts out there at this point, and sometimes it requires a bit of sifting to find one that isn’t just aping the classics.  Catalyst Crime begins with a strong start with “Projection of My Mind,” which has all of the tried-and-true moments the genre demands, but also flexes some muscles to show that they can provide some heaviness (and yes, even a few growls) to go along with the very prominent synthwork and Zoe’s potent singing. In fact, one of the band’s best moves is that while Zoe can soar and elegantly grace each track with some power and personality, they don’t solely rely on her to carry the weight of the band.  For every glorious “Condemn Me to Chaos” chorus, you’ll also find stop on a dime transitions (“Mother Dearest”) that veer between atmospheric and utterly aggressive, dazzling guitar solos (“Without Anesthesia”), and cinematic vibes courtesy of the keyboard section.  But if you are really looking for some vocal magic, “Cognitive Dissonance” features some delightful interplay between Zoe and Jake E (Cyhra, ex-Amaranthe) that’s bound to get your attention real quick.

Catalyst Crime does a nice job of taking all of the familiar elements of symphonic metal and still getting something quite exciting out of them.  Ranging from bombastic and over-the-top to surprisingly heavy to more delicate melody, the band handles it all with finesse and fervor.  A strong debut that’s bound to grab some attention, and rightly so, as it delivers all of the best elements of the genre you could ask for.