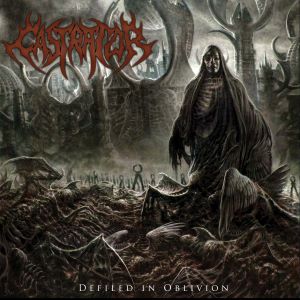 First popping onto the radar with their No Victim EP back in 2015, it’s been seven years since we’ve heard anything from the international death metal act Castrator.  A few line-up changes along the way (but still an all-female act), but the band’s Defiled in Oblivion debut has finally arrived.  One of those old school releases, don’t be quick to assume that everything about the band is in homage to the past.  What Castrator does best is to take the old and give it a fresh, bludgeoning coat of paint.

No doubt about it, there’s a lot of ’80s and ’90s death metal that the band is taking influence from.  The usual suspects apply (Cannibal Corpse, Obituary, Morbid Angel), but it lays down the proper groundwork to establish Castrator’s brand of OSDM.  First and foremost, Defiled in Oblivion is a riff machine.  You’ll be quick to find several examples in each of the songs for this particular branding, most notably when the band slows things down and trends into more Obituary-esque grooving, but that’s not to say that a blazing riff like those found in “Purge the Rotten (Ones)” isn’t just as immediately catchy and memorable.  It’s all about that urgency in the riffing, as Kimberly Orellana’s knack for getting your attention with them is not only quickly noticed, but it never tapers out over the course of the album.  Due to the everchanging speeds, it’s not an extreme release that feels like it repeats itself halfway through.  Another important piece to note are the lyrics, which do not simply ape the past.  Instead, we are given more socially conscious and classy fodder to chew on, and much like with Venom Prison, they don’t beat you over the head with it either.

Those seeking old school death metal will find Defiled in Oblivion to be a worthy addition, despite the obviously large number of bands playing in this particular circle currently.  Castrator lets the riffs and energy do the talking instead of having to twist things into different directions, providing an incredibly catchy yet thoroughly hard-hitting affair that knows exactly what buttons to press with a high degree of precision. 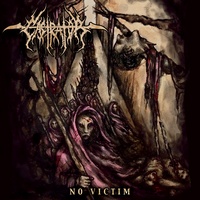