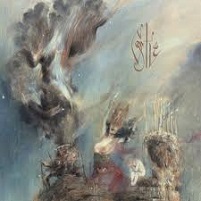 The last couple years have seen a rather fierce emergence of occult-themed and classic metal-inspired bands. Classy groups like The Devil’s Blood, campy forces like Ghost (though don’t mistake me, Ghost is fantastic), and the legitimately strange groups like Occultation (seriously, Three & Seven sounds as though it was recorded in a dense fog). To that end, Castle certainly fit both bills in different ways, instead of borrowing from something graceful like Heart or hyper-melodic like Mercyful Fate, there is instead a decidedly more brutish approach, something akin to Motorhead but crossed with a very doomy vibe, like High On Fire if they existed in 1978. This love of free-range riffage and power drumming is prevalent across Blacklands and is a tightly wound dose of heavy metal love.

Featuring all the trappings of a power trio to the last, “Ever Hunter” kicks things off in stellar fashion, a beefy and even infectious exercise in groove-laden songwriting. Things open up and space out a bit with the thicker and more traditional doom territory of “Corpse Candles.” Eventually things shift back into full on pummel mode with “Blackhands,” the riff-tacular sprint at the end of the song leaving a searing impression that is impossible to shake. While the usually sultry voice of bassist Elizabeth Blackwell sits well in dominating the majority of the album, guitarist Mat Davis takes on vocal duties from time to time with a very semi-Lemmy sounding bark on “Storm Below the Mountain” and the colossal “Curses of the Priests,” the latter featuring consistent trade-offs between the two voices.

37 minute run time. Featuring an ample mix of straight forward ‘rock’ songs and crunchier ‘doom’ complements, there is a lot of love to be found here. In the ever burgeoning scene of proto-metal revivalists it’s always fun to come across a release that’s more than another Black Sabbath rehash fed through the Satanism machine.