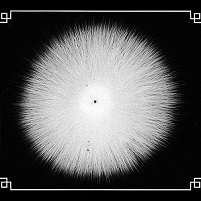 A few years beyond the spectacular Mounds of Ash and Castevet has at last returned with a fantastic and at times very different monster with Obsidian. Picking up Krallice’s own Nick McMaster and featuring a fuller embrace of the technical artistry of the debut, Obsian is an album that’s all about pushing the fringe. Black metal was a moniker that could only be loosely applied to the debut and it’s even looser still here, for whatever trappings of the genre people saw in it have long since been left aside. No, this is a very different (and very awesome) beast.

Krallice vibes run heavy with the introductory track “The Tower,” a pulsating and multi-layered foray through a variety of melodic layers and some VERY upfront bass playing (seriously, McMaster is all over the place throughout).  Progressive comes to the fore from here on, the songs each built around themes but rarely staying put for very long.  Melody is chilly and esoteric throughout, whether on long players “Cavernous” and ‘The Curve” or lead up single “As Fathomed By Beggars and Victims.” The progression in many ways isn’t all that removed from the change Enslaved has undergone over the years, though through radically different means.

No, some who loved the band’s debut are likely to cry foul that the addition of McMaster has driven the band to become a Krallice-lite and forsake everything that made them awesome. Reality couldn’t be further from the truth, for everything that’s here was present in some form on Mounds of Ash. Instead this is the sound of a band emerging from a debut with a voice that is very much its own, much to our surprise and enjoyment. This is progressive in the truest sense, not in endless streams of instrumental wankery, but pushing thematic and song limits in a context that works for the band.

Embrace it, there is little disappointment to be found within.