Carthagods – The Monster in Me (FDA) 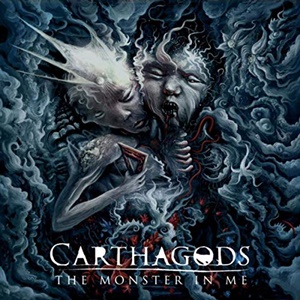 Pioneers in Tunasia for their heavy metal ways during the 1990’s, Carthagods have shared the stage with acts like Blind Guardian, Judas Priest, Slayer, and Epica among others. Following the release of their self-titled debut album in 2015, they worked on their follow-up The Monster in Me. Originally released in 2019, a label boss leaving caused this record to stall – but FDA gives the band a second chance at redemption. Along with some seasoned musicians in key positions for guest / production support, the quintet appears poised to make their mark with some catchy progressive power metal as these eight tracks prove formidable in content and execution.

The register and tone of vocalist Mehdi Khema has that gritty, bluesy nature with occasional peak register resonance that is ideal for the band’s style. Equal parts Russell Allen as say Rick Altzi (Masterplan), his melodies within the mid-tempo title track captivate as an early front half favorite, weaving deftly around the symphonic keyboard and intricate progressive-laden guitar parts. The music possesses a mixture of impressive hooks and groove-like passages against superior musicianship and interplay qualities – you can tell these gentlemen have training and mechanics to manipulate transitions and time signatures at the drop of a dime. Witness the subtle shifts for a power ballad like “The Rebirth” featuring some nifty double kick twists courtesy of drummer Zack Ben Black and an emotive bluesy to shred lead break from Artak or the pounding Middle Eastern power chords and stunted rhythms and riffs that make “Cry Out of the Land” pop forward. You can tell the band has a love of European and American acts – elements of Mystic Prophecy, Symphony X, Pagan’s Mind, and Nevermore crop up as far as influence, tone, and techniques – all given proper context and solid tones through Timo Somers’ production skills.

Mikael Stanne and Mark Jensen also appear in guest vocal support – probably giving The Monster in Me extra attention from those curious (or fans of Dark Tranquillity/Epica), but Carthagods are impressive well on their own for a progressive power metal unit. Never too technical and dynamic track to track in terms of tempo diversity and emotional appeal, followers of these genres should be happy this record is gaining a second chance to make that proper impression, as it’s that strong to deserve it.