Carnifex – Until I Feel Nothing (Victory Records) 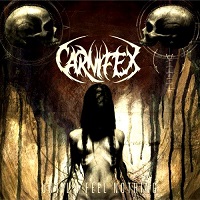 Blistering’s most prominent memory of Carnifex dates back to a 2008 opening gig on Obituary’s North American tour at the Rex Theater in Pittsburgh. With a crowd of mostly over-40 death metallers (yours truly was 26 at the time) showing genuine disinterest, the worst thing that could have happened to the band was technical difficulties. And they happened. Poor singer Scott Lewis couldn’t get his microphone to work to save his life, eventually barking out (and we’re paraphrasing) “Can’t we get a damn microphone to work up here?” Unfortunately, the sound of coughs and casual conversation filled the room, and a befuddled Carnifex left the stage.

Obviously, it’s been a steep climb for the San Diego-based deathcore maestros, and if albums like Until I Feel Nothing prove anything, it’s that Carnifex are probably going to be rendered useless by the classic death metal crowd, and useful to death metal newbies. Until I Feel Nothing is rife with the standard accruements of deathcore, including chunky beatdowns, tuned-down guitars, and frenetic blast beats. Re-inventing the wheel these guys are not.

Yet there’s some teeth to the album, most notably in the form of opener “Deathwish,” where mid-90’s Meshuggagh gets a workout deathcore-style. “Dead But Dreaming” is another winner, utilizing hyper-speed triplets and a devilish groove to its advantage. Along the way, we’re treated to the usual spread of telegraphed beatdowns and Lewis’s non-stop vocal cadence, which eventually makes its mark on the title track where alas, some melody seeps it.

Much better than the band they’re most often compared to (Suicide Silence, who are about as bad as the Indianapolis Colts are right now), Carnifex continues to take baby steps toward respectability. Until I Feel Nothing is about as worthwhile of a deathcore product as we’re going to get at this point in time. If the band were smart, they’d continue to stay more on the “death” side of things and lose the core.