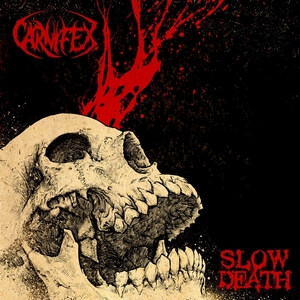 Usually one of the “go-to” reference points when discussing a deathcore album, Carnifex have long had their hands on the wheel when it comes to the genre. Slow Death is their sixth album, and admittedly, the band has done some shaping up and maturing over the course of their time as a band (easily heard if you go back to their debut and listen to this), but it’s still not enough to get past the tropes of deathcore.

On the positive side, Carnifex has weathered the storm because they have changed things up, as opposed to simply relying upon breakdown after breakdown to get their point across. There are a number of atmospheric elements that the band dabbles in from start to finish here, which do take some of the burden off of the “breakdown issue.” One of the album’s strongest songs is the title track, with bathes in mid-tempo chugs alongside some blackened moments and an impressive melodic lead towards the end of song. In fact, the band is at its best when they ditch the usual chugga-chugga format and inject blackened melodies (“Drown Me in Blood”), heightened blasts (“Necrotoxic”) or a well-timed solo (“Black Candles Burning”). Unfortunately, they are still somewhat dependent on the breakdowns and clichéd lyrical content to bring the rest of their arsenal (“Six Feet Closer to Hell”), alongside vocals that never break from the genre norms.

On the one hand, you can call it a ‘slowly but surely’ progression, but on the other, they are simply adding in a few nuances to distance themselves ever so slightly from the rest of the genre that they helped to build. Carnifex fans will eat it up for sure, but don’t expect the band to gain much traction outside of their devoted with Slow Death.