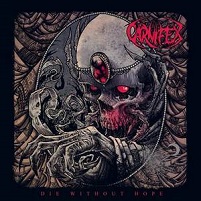 While deathcore is not a subgenre of metal particularly known for diverse musical dynamics and consistently unique offerings by the track, Carnifex has long been an exceptional outfit that can balance the requirements of maintaining the “core” style with delivering sinister, lasting impressions on their listeners. Die Without Hope, the long-awaited follow-up to 2010’s Hell Chose Me not only continues this trend the band has set for itself, however, but instead signals Carnifex’s creative zenith, serving as a standout album that represents just how significant a deathcore-done-right recording can be.

All the mainstay qualities of deathcore (breakdowns, blasts, alternating high and low vocals) are accounted for in abundance, but one need only listen to the opening track, “Salvation Is Dead,” to see that there is much more at work. The song’s structure is vastly more intricate than standard fare, barraging the listener with a veritable arsenal of rapidly changing riffs and tempos and giving the song an amorphous quality negated by hooks and refrains deftly employed at the most opportune moments.

Carnifex avoids the one-hit-wonder syndrome of delivering a crushing opener only to disappoint with lackluster follow-through, however. Instead, the entirety of the album maintains this newfound (or at least newly honed) compositional adventurousness, utilizing more novel elements on occasion, specifically the haunting piano heard in “Dark Days” and “Condemned to Decay” that falls somewhere between Cradle of Filth and Castlevania. Also, new guitarist Jordan Lockrey solidifies his position in the band by delivering more technically proficient leads and solos than can be found anywhere else in the group’s catalogue, complementing both the brutality and melody of Cory Arford’s memorable guitar riffage, and vocalist Scott Lewis exercises his penchant for inescapably catchy vocal juxtaposition to perfection.

With only a smattering of dry spots—a seemingly stunted solo in the otherwise-excellent “Dark Days” and an unwelcomingly long-winded breakdown passage in “Dragged into the Grave”—Carnifex has stepped up their game to a level no one could have anticipated. Die Without Hope is well crafted, expertly executed, and easily an early contender for year’s best.