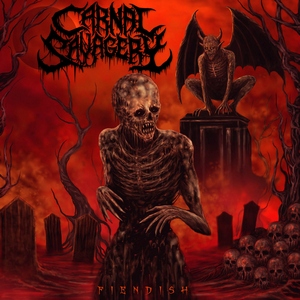 Being able to dig deep with their roots to the beginnings of the Swedish death metal movement, Carnal Savagery has had plenty of time to keep their buzzsawing HM-2 pedals razor sharp. That’s right, it’s another one of those cult ‘made a few demos and did some tours” and vanished for a significant number of years. But the band returned last year and released a full-length in the form of Grotesque Macabre, which got them signed to Moribund Records. Now they are quick to hit the studio for the follow-up in Fiendish.

There’s no real surprises when it comes to the type of material that Carnal Savagery is playing. Being a part of the Swedish death metal movement in its early years gives them a bit of legitimacy to their cause, but otherwise it’s exactly what you’d expect. That’s not necessarily a bad thing though, as Carnal Savagery is on top of their game when it comes to blending the genre’s two biggest strengths: buzzing, aggressive guitarwork and catchy melodic backdrops. The mid-tempo is driven hard for much of the time, as it should be in order to really pull out the melodies, with the accelerator being kicked into high gear to keep things fresh, along with an occasional grind to slower speeds. Textbook stuff in theory, but it’s still a fun trip. It’s hard not to fall for a groovy, infectious track like “Dead Rotten Meat,” with its burly riffs and surprisingly catchy and effective chorus. The following track, “Maggot Infested Flesh,” is one of the faster tracks on the release, and also has an enjoyably frantic feel to it, with the buzzing HM-2 giving it a raw coating for the band to zip ahead with.

It’s always a matter of it an album like this has that ‘fun factor’ going for it, and Fiendish shines in that area. Tons of heavy, headbanging riffs that will make you want to crank it to full volume. It may not bring too much new to the table, but it makes up for it with plenty of aggressive fun.