Carnal Garden – Where They Are Silent (Eclectic Productions) 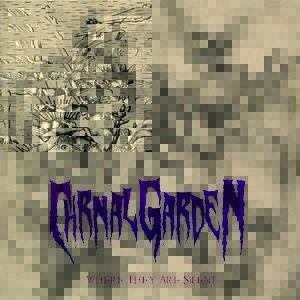 Swedish death metal by way of Greece, Carnal Garden are next on the chopping block for the old school death metal sound. Where They Are Silent is their first full-length album, and the act features members of Pigskinner, Abyssus, and Blessed by Perversion, so it’s clear they have some experience between them prior to Carnal Garden.

Truthfully, Where They Are Silent can be summed up in one line, as they bring out the Swedish death metal flag triumphantly and blatantly. There’s not much that’s going to really shock you on this one, and the band plays things quite straight for the most part. The only piece that may come off as ‘by the books’ are the vocals, which have Obituary written all over them at times. Some more barked lines come about as well, but songs like “Crushing Skulls” have a more Tardy-like delivery, even going as far as to replicate the Celtic Frost-inspired grunts to accompany them. You’ll find a mix of slower tracks, like “Morbid Dreams,” with more mid-tempo and death ‘n roll type tracks like “World Infected” and uptempo cuts such as “In the Garden of Death” providing some variety in this front. Several songs use samples at the beginning, but come across as neither helpful nor bothersome in the end.

While there’s nothing particularly disappointing about Where They Are Silent, it ultimately just feels too comfortable in the HM-2 worship zone to establish any of its own value. There’s no fault with the writing level so much as it sounding just so similar to the rest of what’s already out there, and not enough energy/charisma to make it stand the test of time.