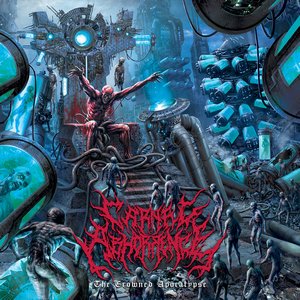 Slamming/brutal death metal with some technical edges catch your interest? If so, Carnal Abhorrence are here to dish out plenty of musical devastation. The Crowned Apocalypse is the second full-length (following last year’s Goremandizing Rupture) from this Kentucky act, and be prepared to be knocked back a bit with their rather vicious take on the genre.

While there’s nothing that really makes the band stand too far outside the brutal norms, they combine things into a product that is more cohesive than you may initially think, as well as toss in a few extra bells and whistles to keep you interested. With a release like this, it’s all about coming out of the gate quickly, and Carnal Abhorrence wastes no time in getting brutal. Lots of hyper fast riffing and drum blasts, along with the gurgled vocal specialty, are sure to tickle your fancy for the sound. Monstrous slowdowns into groove come at the right times to keep it from becoming too mundane and give your neck a workout (see “Cycles of Cybernetic De-Evolution”), and the speedy parts actually benefit from some slight technical insertions. First and foremost, Carnal Abhorrence keep the aggression at the front of everything, as a release like this should, but little tweaks brought into tracks, such as the melodic bits of “The Unholy Infinity” or the playful riffs of “Sycophant of the Throne” do give them an extra boost instead of being a jarring blur. Also helpful is the short and to the point track lengths, which keep things running smoothly, particularly in the second half where it is much needed.

The Crowned Apocalypse is decidedly heavy and rumbles with brutality. Carnal Abhorrence know exactly how to play to the strengths of the genre and do so well. Well-worth looking into if you want something brutal but still keeps an added air of retention to it.