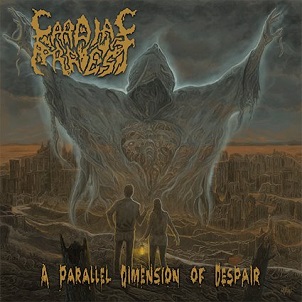 Chicago denizens of death Cardiac Arrest, in their unwavering, forever true-to-form approach to pure death metal, have amassed a pretty healthy discography when you swing back around to it. Their bi-annual run of albums that started with 2006’s Morgue Mutilations netted a few pounders, namely 2010’s Haven for the Insane and 2012’s Vortex of Violence, while their last output, 2014’s And Death Shall Set You Free was in some respects, the band at its most rabid. But, because of this adherence, you can hear/smell an album like A Parallel Dimension of Despair from a mile away.

Favoring the balls-and-chunk brand of DM that’s complemented by blasts, Cardiac Arrest are essentially a Chicago band who should be enjoying far more favorable environs like Florida, for instance. As such, some of riff combos and solo bursts tend to whisk one back to when Tampa was in favor and could do no wrong. Nevertheless, the pummeling opener “Immoral and Absurd” combined with “Become the Pain” provide more than enough vintage, hardline DM to the perpetually toe the line. Oddly enough, it’s the 1:07-minute “Rotting Creator” that spews forth as the album’s most memorable cut — a venerable blast of self-titled era Deicide.

The comfortable little niche Cardiac Arrest currently occupies has benefited the band for over 20 years, even when death metal was taking some serious body blows from black metal and even metalcore. (Sheesh.) Essentially, A Parallel Dimension of Despair finds Cardiac Arrest sticking to their guns, sort of like how a serving of good ribs will stick to your ribs…that sort of thing. Just make sure they are festering and morbid, okay?