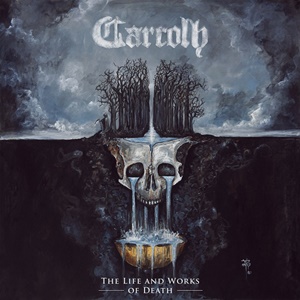 Cult in appeal, epic doom may be small in stature regarding musicians playing in the genre, yet the quality remains quite high over the decades. It’s always refreshing to hear newer acts put their take on the style – as we have here with French band Carcolh. Named for a mythical beast from French folklore (a large, slimy snail-like serpent with hairy tentacles and a large shell), it’s rather appropriate for the five-piece to describe their low-tuned riffs, slower tempos, and classic approach through their second album The Life and Works of Death.

On initial passes expect the weight of riffs and clean to power transitions Quentin Aberne and Olivier Blanc display through their guitar work to remind people of Black Sabbath (Dio-era especially) and all facets of Candlemass. You can expect cascading, measured lead breaks as well as thoughtful rhythms and proper, contextual supplementation that drives the moody, morose atmosphere of the ten-minute plus “The Blind Goddess” into the hearts of epic doom mavens, while the shorter follow-up “When the Embers Light the Way” grabs you because of its circular Sabbath-esque groove and subsequent melodic textures. Although most of the vocals are clean, the occasional darker growl aspects add a bit of chilling darkness to the proceedings – as Sébastien Fanton with his impassioned mid-range conveys the lyrics with sorrow, despair, as well as deliverance, hitting some spine-tingling aspects during the early verses for a lower register, bass/keyboard-based “Aftermath”. Settling in at a comfortable 48 minutes, the six songs possess that hefty aural lumber that crushes anything weak that may stand in its way – the twin guitars and lower than resting heartbeat tempos making the closing “Sepulchre” a fitting conclusion to Carcolh’s approach for the genre.

Currently strangers to most, Carcolh will be one of those discoveries talked about throughout the doom community based on this output. The Life and Works of Death leans into its epic framework, builds out gracefully, and digs deep into your soul and psyche to take negative emotions and thoughts into another safe dimension.