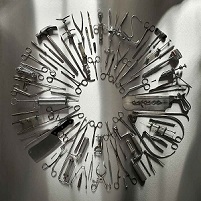 After nearly two decades since Carcass’s last studio release, these perennial underground favorites have returned to deliver a new slab of unrepentant extremity, and a new batch of unwieldy song titles (“Noncompliance to ASTM F 899-12 Standard” anyone?). And deliver they do with Surgical Steel.

Surgical Steel showcases the unpredictability and eclectic nuances of style that have defined Carcass’s career, all the while filtering these tried-and-true formulae through more modern production sensibilities, the sonic savagery crisp, clear, and vicious without crossing the line into robotic. “Thrasher’s Abattoir,” “Captive Bolt Pistol,” and “Cadaver Pouch Conveyor System” accost with thrashing fury of the Necroticism variety—the latter track and “The Master Butcher’s Apron” occasionally borrowing from the classic grindcore riff catalogue—while the aforementioned “Noncompliance…” and “The Granulating Dark Satanic Mills” attack with the melodiousness of the Heartwork sessions. Finally, the band invokes its inner Rush with album closer “Mount of Execution,” a sprawling eight-minute track that incorporates acoustic guitar, mid-tempo rhythms that seamlessly vacillate from melodic to metallic, and a bridge section that ventures into ‘70s hard rock.

Band mainstays Jeff Walker and Bill Steer shine: Walker’s vocals sounding absolutely maniacal from start to finish and Steer’s nonlinear song structures racking up the tension, making the listener feel as if he’s navigating a minefield in a full sprint with the fatal misstep only moments away. New drummer Dan Wilding also turns in an inspired performance, transitioning from straightforward power-drumming to breakneck blasting and back again almost instantaneously. Each musician is at the top of his game, and the group in sum approaches each song with versatility and variety that demands multiple listens to grasp the full scope.

While the band doesn’t foray into uncharted territory quite as they were wont to do in the past, they have proven that they’re still more than capable of delivering the classic Carcass sound. In more befitting terms, they may not be honing new blades for their surgical incisions, but there’s no need to when the old ones cut as finely as ever.