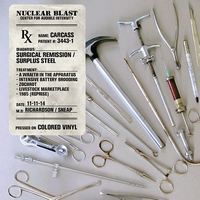 Carcass needs little introduction. After a big year in 2013 for the band, who saw their triumphant return to the world’s stage come to fruition with an acclaimed album and extensive touring, Surgical Remission/Surplus Steel is one of the reasons that Surgical Steel was such a terrific album to begin with – it is an album without filler…all killer. So, what happened to all that trimmed fat? It plopped down right here on Surgical Remission/Surplus Steel – all tracks that didn’t make the grade from the Surgical Steel sessions.

“A Wraith in The Apparatus” is a serviceable cut in riff and verse, with a lackluster chorus, but is redeemed by Bill Steer’s pre-solo riff and, of course, his trademark groovin’ melodic style on the solo, clearly the best part of the track. “Intensive Battery Brooding” sees the band slow down to a stomping, heavy groove, almost akin to an old Pantera tune…no great shakes here…until with about 1:20 left where the band delivers a pretty darn killer, riff-crazy, thrash section to close things down – once again, a saving grace of sorts. “Zochrot” plods along, almost wholly carried by riff, with some tempo variances yada yada. Eh. “Livestock Marketplace”, the last proper song on the EP is another slower track, featuring heavy British-Fried riff action, and interesting chorus using just a twinge of “clean” vocals (something that carries a melody, at any rate). Complete with some slide guitar soloing, we hear the band with perhaps a dusting of some old COC vibes.

Closing things down is “1985 Reprise”, a great little piece of guitar melodies wrapped around each other, that you know as the intro from the aforementioned Surgical Steel. What would probably be noteworthy songs for a lesser band, there is a reason these tunes didn’t make the cut. Surgical Remission/Surplus Steel should be for the die-hards only.