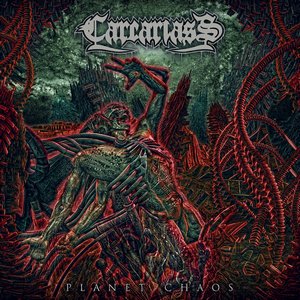 Certainly one of those, ‘well that came out of nowhere’ types of releases, French progressive death metal act Carcariass have made a long-awaited return in the form of their fifth full-length Planet Chaos. It’s been an entire decade since their fourth album (E-xtinction), and it seemed that the band had more or less fallen off of the map (short of two compilation albums in that time, that is).

With Planet Chaos, it appears that the band has not lost a step in the time between releases. Their particular brand of progressive death metal does lean in a more melodeath direction, albeit with some even more playful guitarwork. This is the piece of the band that really gets the most emphasis on Planet Chaos, as there are almost as many instrumental tracks as vocal-backed ones. Due to the sheer songwriting and intricate yet catchy showmanship that takes place in each one of these instrumental tracks, there’s never a lost moment. In fact, the instrumental tracks allow some added cohesion between the songs themselves, allowing them to really merge together more appropriately to tell a much grander tale. Even on the vocal-backed tracks, there’s still a lot of progressive melodies and riffs to be had, and while the music is definitely (melo)death in tone, the weaving of the guitarwork into everything really allows your mind to wander – still even at the heaviest moments. Because of all of this, it’s tough to really pick tracks as particular focal points or exemplars, which makes Planet Chaos something best listened to in one setting to really absorb the atmosphere and musicianship itself.

Equally appealing to those looking for progressivism or death metal itself, no one is going to doubt the hooks and overall catchiness that Carcariass can put to the test. Planet Chaos stands out due to the high number of instrumental tracks, which keep the sounds flowing without coming across as too indulgent or unneeded. Instead providing a groundwork for Carcariass to lay out some impressive skills while keeping the listener entertained.