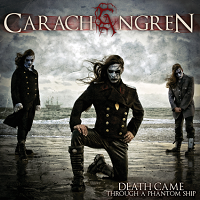 Does anyone remember long-defunct French black metallers Anorexia Nervosa? DR definitely does, having thoroughly enjoyed their 2004 swansong Redemption Process to the max. AN was one of those bands who had no shame in being theatrical and over-dramatic with their orchestral sounds, and while you knew they weren’t playing with a real orchestra ala Dimmu Borgir or Cradle of Filth, the impact was made. On the re-release of their 2010 effort, Death Came Through A Phantom Ship, Dutch black metal crew Carach Angren make largely the same statement…maybe black metal is ready for legitimate theater.

It appears that standard black metal operatives are not the point of focus; the story line and symphonic sounds are. It’s a constant churn –  when most bands of this ilk will find ways to weave in a nasty little guitar bit or king-sized melody, Carach Angren thinks differently. Jams like “Bloodstains on the Captain’s Log” and “Departure Towards A Nautical Curse” (guess what the theme is?) showcase some of the band’s riff and syncopation capabilities, and while they’re not far from the highest-rung, it’s easy to get lost in the mire of pounding keyboards, vocals effects, and quirky tempo shifts.

Because a black metal band suitable for the universal tag simply doesn’t exist at the present time (Emperor would rank if they were still active), you can allot some respect and listening function to what Carach Angren is trying to pull off. Different? Absolutely. Better or more appealing than someone like Anorexia Nervosa or A Forest of Stars? Eh, not quite.