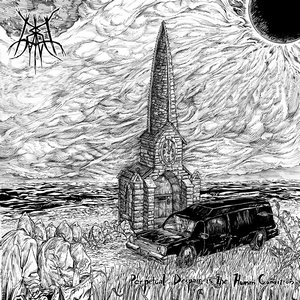 Jumping onto the Cara Neir bandwagon with their last full-length, Portals to a Better, Dead World, it’s been a long wait to hear a new full-length from the act. Sure, they’ve kept busy with a number of smaller releases in that time, but as is the case with most bands, there’s just something special about a new long player.

There are some stark differences between Perpetual Despair is the Human Condition and Portals. The most significant is how much straighter and to the point that Perpetual Despair is. Where Portals merged elements of grind and other experimental moods into the mix, this album seems more directly bent on providing a (post) black metal mood. It’s not to say that the band don’t have a point in mind, but at the same time, it’s disappointing in a way compared to the varied and striking contrasts present in its predecessor. But the overall mood is disturbingly bleak, eloquently displayed by the cover art as well as the music within. There’s a level of unease with the music, as the tremolo picking doesn’t go the usual post-black sorrow but rather steering one into the abyss. Unfortunately the more straight-forward path means that the album doesn’t branch out quite as far, which means the blasting/tremolo picking has a tendency to feel like it’s repeating before the album’s end.

Some of the magic from Portals does appear in snippets (d-beats, hardcore-influences) during Perpetual Despair is the Human Condition, but that only serves to remind one of how strong a release that was. By going in a more straight-forward direction, Cara Neir do create a darker atmosphere, but at the expense of part of what made them so compelling in the first place.