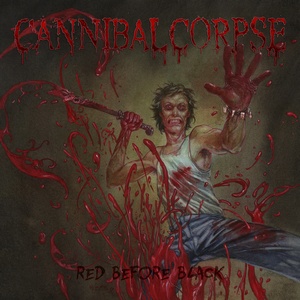 Often imitated, but never duplicated, Cannibal Corpse have returned for their fourteenth album with Red Before Black. One of the staples of extreme music and kings of death metal itself, it goes without say that you can make some good assumptions about what a new Corpse album is going to sound like based on their consistency through the years. But it doesn’t make it any less exciting to hear, especially when the band is firing on all cylinders like they do here on Red Before Black.

The trademark Cannibal Corpse essentials are all here and in glowing fashion. You can really hear the fury at which Paul Mazurkiewicz is hitting the drums this time around, and it’s a good indicator of all the band’s overall energy. The sound is quite familiar, and takes into account the more thrashy sound from their more recent releases. But there’s a certain rawness and ferocity to be found here. The band is less concerned about the more technical aspects this time around (though they still can be found), and Red Before Black trades this for a more bludgeoning and unhinged vibe. The sound is just plain heavy (no doubt partially a perk from returning to Erik Rutan for production) and it simply boils with intensity with each track. Cuts like the aptly titled “Firestorm Vengeance” and the title track serve to showcase just how much frenetic things can get. But fear not, there are still hooks and wild solos aplenty, with “Code of the Slashers” having some of the strongest groove from the band in recent memory, and “Scavenger Consuming Death” raising a fist-pumping anthem of chorus (with a strong solo to boot). Catchy or brutal (or both), there’s a darkened atmosphere that all these songs revel in that will certainly call some listeners back to the band’s earlier days, to a time when death metal was more about savagery than technical posturing.

Hard to complain about much with Red Before Black. Even if there are death metal records that are more technical in execution or more brutal in design, there’s still nothing like getting a fresh batch of Cannibal Corpse. They do what they do better than anyone around (and have been doing it longer) – and what they do of course, is to bring you into a depraved, fantastical world and give you a relentless beating that you can’t help but ask for more of.