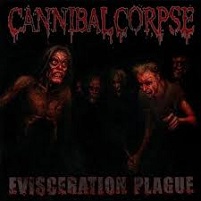 As quickly as one can sour on brutal death metal, such an affliction has never hit Cannibal Corpse. Granted, they’ve utilized practically the same formula since 1996’s Vile, but where Cannibal Corpse succeeds where so many fail is the fact they write compact, instantly brutal numbers that rely on the band’s strengths. Now at their arguable peak, the Floridians return with what might be their best album since the aforementioned Vile, which in a sense, would make Evisceration Plague their finest hour in the George “Corpsegrinder” Fischer-era.

Now approaching his 13th year as frontman of CC, Fischer’s considerable vocal dimensions are at the epicenter of why Corpse is so brutal (and yeah, we’re going to use that word a lot – deal with it). Fischer’s vocal attack on “Scalding Hail” is as fast as the singer has ever rattled off tales of gore, while his bellows on “Unnatural” and “Shatter Their Bones” totally annihilate anything his once arch nemesis Chris Barnes has ever done.

The riffs are out in full force on Evisceration Plague, highlighted by the frenetic “Scalding Hail,” the chunky “To Decompose,” the tech-savvy of “Beheading and Burning,” the manic buzzing of “Carnivorous Swarm” and the crawling, kill-you-slowly grind of “Evisceration Plague” all are instantly gratifying, long-lasting death metal cuts that stick around well after the first few listens.

As suggested to yours truly in a recent interview with bassist Alex Webster, drummer Paul Mazurkiewicz remains Cannibal Corpses’ ace-in-the-hole. His one-arm blasts (which basically, are the wrong way to do a blast-beat) continue to make CC’s songs more brutish and aggro. Mazurkiewicz even tosses in some nimble time-keeping on “Evidence In the Furnace.”

The one-trick pony world of brutal death metal may never change, but Cannibal Corpse are now and forever central to the subgenre’s surprising staying power. The progression of Corpse is strikingly evident and perhaps that’s the best thing about this band – their death metal comrades (Obituary, Deicide, Nile, to a degree) have topped off, but Cannibal Corpse keep getting better, more brutal, resulting in better, brutal songs. Weird concept for brutal death metal, eh? There’s that word again. “Brootal.”