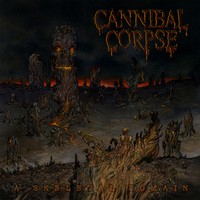 Hard to believe Cannibal Corpse has reached the lucky number thirteen! The band has weathered the test of time longer than most, never felt the need to disband and reunite, and have waved the death metal banner high and with pride all through their years. The initials “CC” at this point should stand for “continued consistency.”

A new Cannibal Corpse album sounds like Cannibal Corpse. Shocker right? You know what you are going to get, and A Skeletal Domain delivers all the goods that make them the reigning kings of death metal: wicked riffs, thundering drums, rumbling bass lines, and Corpsegrinder giving it his all to lacerate his vocal cords. As the band has often done over the years, A Skeletal Domain sees the band using a new producer (Mark Lewis) after using Erik Rutan for the last few albums. The guitars sound a bit cleaner and more decipherable without losing any of their death metal oomph, giving faster riffing in tracks like “The Murderer’s Pact” (what a solo!) and “Icepick Lobotomy” a crisp and biting tone. “Kill or Become” seemed primed to be a new classic live track, with a meaty opening riff that quickly speeds up and has one of the most memorable (and growl-along friendly) choruses on the album. It does face some tough competition though, particularly from the thrashy riffage of “Bloodstained Cement,” groove of “Vector of Cruelty,” and the slow build of “Funeral Cremation.”

One thing that always seems to drive Cannibal Corpse above many death metal bands is their ability to craft memorable hooks into their music without watering down or weakening their death metal. If you are looking for some new examples of this, feel free to check out “Sadistic Embodiment” or “Hollowed Bodies” to get your new fix. But really, you can randomly select any track and you are sure to find something to sink your teeth into that you’ll want to revisit after hearing the entire album.

Some complain that Cannibal Corpse stay the course, album after album, but the fact is that they do it better than anyone else. Sure there are bands that play faster/slower or more technical but there is only one Cannibal Corpse. There’s a reason that they are the benchmark everyone has looked towards for the last quarter-century for death metal, and A Skeletal Domain is a fine addition to the Cannibal Corpse discography.