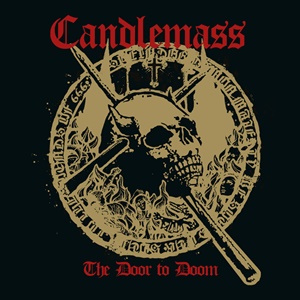 Never say never when it comes to Leif Edling and Candlemass recording another album. Remember back in 2012 when he announced Psalms for the Dead would be the final studio record – the band content to play live instead? Exit Robert Lowe, enter Mats Levén – who stayed with the band for a few years including 2016’s Death Thy Lover EP before leaving himself. The rally cry for the faithful has been for the band to reunite with Johan Längquist – the singer on the cult classic debut Epicus Doomicus Metallicus back in 1986. Well here we are opening The Door to Doom, a union of the past and present to see if lightning can strike twice in the Swedes magical landscape as purveyors of a genre known for its crushing riffs and morose, emotional nature.

The band built a reputation on bone-chilling rhythm guitars that signal shivers along with mountain-top measured melodies and then adding the right rhythm section hooks and bottom-end thump to tie it all together into a bountiful, somber escape into the doom netherworld. Leif as principal songwriter knows his craft and the seasoned musicians around him to squeeze the right dynamic impact at key moments – be it subdued in clean guitar ambiance for Johan’s bluesy, reflective delivery for the shorter 3:43 “Bridge of the Blind” on through to the mid-tempo marching strains for the crunchy follow-up “Death’s Wheel”, where the guitars have a bit of NWOBHM/circular extra dimension quality. Mesmerizing comes to mind when lead guitarist Lars ‘Lasse’ Johansson unleash his thoughtful breaks – a combination of frets of flurry and emotive bends and transitions – “Under the Ocean” and the already talked about “Death’s Wheel” two stunners most will put on replay. The rougher exterior in spots gives “Black Trinity” that early 70’s embellishment, the drumming and fill work swinging for the Zeppelin/Sabbath fences, containing the best line of the record ‘the ambassadors of doom’.

Johan as a singer oozes doom – bluesy, larger than life, careful to emphasize the key notes in verses and choruses that make singing along to the record seamless. Check out his best work for the up-tempo opener “Splendor Demon Majesty” as well as “Children of the Grave”-esque “House of Doom” to become indoctrinated in his phrasing and emotionally touching finesse through a metal register. And this scribe is sure Leif probably had goosebumps when securing the doom lord of riffs Tony Iommi’s seal of approval to contribute a lead during “Astorolus – The Great Octopus” – unmistakable and breathtaking. Who knows if we’ll get another Candlemass album – but most will be glad The Door to Doom doesn’t tarnish their legacy, and give the faithful more reason to go doom dancing into the night.