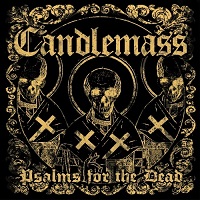 Consumers prefer their favorite products or brands last forever. Artists understand there’s a limited shelf life when it comes to excellence. Sooner or later, skills decline, priorities change, and circumstances dictate the ending of one sort to begin with new blood, new horizons, and a new outlook on the next stage of your life.

Bassist Leif Edling announced prior to the release of this eleventh studio album that for Candlemass, Psalms For the Dead would be the final studio offering for these doom metal pioneers. Knowing the track record of the group the 9 songs for this record will continue to epitomize the thunderous appeal of down-tuned, melancholy-laden riffs, hypnotic bass grooves and monstrously deep drumming against the chilling Robert Lowe vocal delivery.

It doesn’t matter that the opening four note guitar bends for “The Sound of Dying Demons” lift themselves from “Iron Man” and transplant themselves into modern times – the background demon-like vocals and slithering tempo against the eerie organ accompaniment rules as much as Lars ‘Lasse’ Johansson’s fluid lead break. The wah-wah pedal use morphs “Waterwitch” into another highlight, Lowe drawing out the words with this sense of lost despair and Edling’s sparse bass notes tickle the eardrums with that emotional resonance.

Ready to march against the masses, “The Killing of the Sun” begins with an almost “I Love It Loud” / Kiss rhythm where once again the 70’s style organ takes shape against the steel bound riff distortion. The follow up “Siren Song” digs into the Jon Lord/ Deep Purple side of pitch bending tricks- sinister chords and soloing with jam-like fever. Keeping tempos at half to a quarter of normal heavy metal proceedings could prove tediously boring in the hands of most musicians- but not Candlemass, as they know when to elevate the riff, the melody, the pace, and the right chord change to bring the listener to another emotional plane.

Whereas Death Magic Doom appeared to be a more straightforward doom affair,Psalms For the Dead leaves no dynamic nuance unturned, reaching back into Edling’s roots of hard rock and heavy metal. Rest in studio peace, Candlemass – you’ve released something as memorable as Nightfall was in my youthful metallic excitement years.