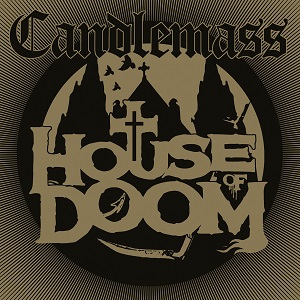 Candlemass creating a soundtrack for a video game…not quite the sign of the apocalypse (or total doom), but you get the idea main dude Leif Edling is looking for ways to keep the band interesting rather than sticking to the usual studio album release schedule. House of Doom marks the second post-“retirement from new material” release for the Swedes, following up 2016’s strong Death Thy Lover EP.

Mats Levén is still out front, mighty pipes and all, while Edling’s striking doom strokes strike as they should, meaning, they’re heavy enough to shake yer foundation. Lead cut “House of Doom” is the anthem here, so to speak, with Levén howling at the silvery moon. And, check out the wicked keyboard solo from Per Wiberg (ex-Opeth) — it’s a stormer. The EP follows the path of latter-day Candlemass, in particular, the chorus of “Flowers of Deception” and the sludge-and-trudge of “Dolls on a Wall.” (The acoustic “Fortuneteller” is a miss, though.)

Now, Candlemass is under no obligation to release new material — anything now is purely for the sake of heeding their creative whims. House of Doom, video game pairing and all, will probably not modernize the legendary doomsters. That’s not the point. Anything to get Leif Edling writing new material should always be the stated goal, to which mission is accomplished here.