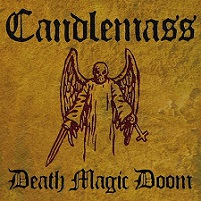 By all accounts, this is not the best Candlemass album since Nightfall, contrary to what Leif Edling says, but it’s still a marvel, jam-packed with classic doom goodies that go on and on. The second album with Robert Lowe on the mic, Death Magic Doom is an extension of 2007’s King of the Grey Islands, perhaps more weighty (lots of slow-footed jams) and definitely more Sabbath-inspired.

In part to his increased comfort level (that’s what two full years in the band will do to you), Lowe plays a major role, rivaling the Messiah-dominated days ofTales of Creation and 2005’s self-titled platter. Lowe is given a lot to sing

over and sing he does. Opener “If I Ever Die” sees the Texan get a few solo spots in which to charm us and the album highlight “The Bleeding Baroness” appears to be tailor-made for his gruff, nearly flawless vocals.

Edling does his part, providing a handful of killer, trademark riffs that gets off on the right foot with “If I Ever Die,” which might be one of his more cunning riffs to date. “Hammer of Doom” is a slow-motion, Volume IV heavyweight, while “Demon of the Deep” opens with some melodic guitar

strumming along with Lowe, only to develop into a standard CMass doom dancer and “Dead Angel” could be the fastest CMass song to date. So much for getting old and slowing down (yeah, pointing right at you, Vinny Appice).

Hats off once again to six-string slinger Lars Johansson, whose fluent lead work is the highlight on “House

of 1,000 Voices” and literally every time he’s given a spot in which to solo. A totally underrated guitar God if there ever was one.

There’s a lot to like about Death Magic Doom and you’d have to think that there’s no one in European doom, including Heaven and Hell that can top Leif and his gang. Yet another worthy chapter in the Candlemass story, Death Magic Doom, may Candlemass continue to drink from doom fountain of youth.