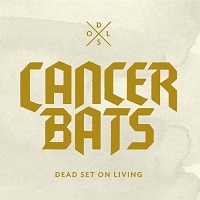 Canadian road warriors, groove metal punks and all round good guys Cancer Bats are back and you’d better sit up and listen. Following quickly from last year’s Bears, Mayors, Scraps & Bones with its breakout single, a cover of the Beastie Boys’ “Sabotage,” they’re clearly intent on riding the crest of the wave. Dead Set On Living takes many of the themes they’re known for, punk, southern groove metal, a heft of sludge, hooks and honest lyrics, bringing them all to the next level.

Still proving they’re angry at those who’ve crossed them in the past the pissed off vitriol of “R.A.T.S.” lays the groundwork. “Bricks And Mortar” introduces a dollop of melody and a hook you could swing off, all hung around a huge, rumbling riff. The mix of punk and metal throughout works brilliantly, and never once do you feel the need to tag a –core at the end of anything. Dead Set On Living is a damn fine hellride of an album, especially when you hit into the one-two knock-out punch of “Drunken Physics” and “Bastards.” The former features some great chorus chants and skittering guitar work, while the latter is a fire-blowing rock beast aimed between the eyes. Meanwhile “Breathe Armageddon” has that familiar Cancer Bats swing to it in spades, while “New World Alliance” is loaded with pull and swing and a great, raw vocal performance.

In fact almost any song on here stands up on its own merits and it’s only as you’re working through Dead Set On Living that you find the flaw. It’s not as good as Hail Destroyer and unfortunately, anyone who’s coming expecting the level of perfection they achieved on that record is going to be somewhat disappointed. It just misses the mark slightly in terms of the power and impact that album had. As already pointed out there’s nothing wrong with the songs themselves, it’s just as a whole it doesn’t have the extra level of brilliance thatHail Destroyer or the new Everytime I Die album do.

When Cancer Bats head out on the road with this one they’re going to leave venues wrecked and sweating behind them, expect nothing less in that regard. Welcome them back, get your fist pumping to “Bastards” and prepare to have your face rocked.