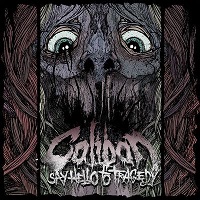 Gotta hand to these Germans – they’re awfully stubborn. Unlike fellow countrymen Heaven Shall Burn or Neaera, Caliban refuse to budge from the melodic metalcore sound they ushered in at the dawn of the decade with the still very potent The Split Program split with the aforementioned HSB. They climaxed with 2004’s resounding The Opposite From Within and since that point, well, we are at that point – Say Hello To Tragedy is neither progression or regression, just another Caliban album.

The band has never been about speed, rather, it’s about the monster grooves and semi-telegraphed beatdowns. The opening 1-2 punch of “24 Years” and “Love Song

” are proof-positive of this, as singer Andreas Dörner spews over quasi-melodic riffage and half-time drum patterns. It’s all good and fun, actually, even heading nortward with “End This Sickness,” which is probably the best song of the bunch.

Caliban does manage to douse what little fire they started from the opening with clean vocals, which has and always will be the band’s achilles heal. Whiney, EMO-inspired vocals climb over “Walk Like the Dead,” an otherwise solid, moving number, soiled by Denis Schmidt’s vocal stylings. Such an offense also occurs on “No One Is Safe” and “Unleash Your Voice” to name a few.

For a band so set in its ways, Caliban has managed to squeak out seven full-lengths, all of which that have something of worth, regardless of one’s penchant for metal of the core. By no means world-beating stuff, Say Hello To Tragedy catches Caliban doing what they do, doing things that no one else really does anymore. Works here.