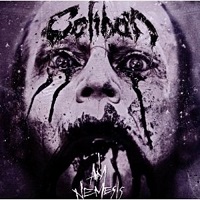 The first line uttered on Caliban’s I Am Nemesis is: You’ve got to be fucking kiddin’ me!” Geez, if this scribe had a dollar every time he uttered that line on Sundays during football season, then life would probably consist of yachts and caviar. That’s a bit of a stretch, but really, how the heck has Caliban managed to last this long is probably the operative question. They’re like the cockroaches of the German metalcore scene…they just won’t die.

This is tried-and-true melodic metalcore, perfectly set up for 2006, yet able to sound convincing in 2012. It makes no sense to be honest, but there’s something about Caliban that gives them a free pass. Perhaps it’s found in the dreary melodic template on “Memorial,” which contains a full-fledged Good Cop clean chorus that in most cases would flame out, but here it’s a soaring high point. Even the gang shout-along chorus on “No Tomorrow” has a lot of stick to it. Inexplicable.

To their credit, Caliban operates in standard metalcore territory as well as anyone. Sure, they take the occasional beatdown bait (see: “Edge of Black”) and guitarist Denis Schmidt’s clean vocals on “Davy Jones” and “Broadcast to Damnation” are borderline whiny, so songs like “Deadly Dream” and “Open Letter” are able to compensate by way of off-kilter Swedish riffs and main singer Andreas Doerner’s ready-to-rumble-in-the-Reich roar.

There’s something to be said for a band clinging to a sound that’s a veritable afterthought for many. The tuneless rumblings of deathcore has long surpassed the Swede-happy metalcore sound, but here’s Caliban, still throwing down after 15 years with I Am Nemesis as if nothing ever happened. Should they last another 15, then we’ll definitely utter “You’ve got to be fucking kiddin’ me!”