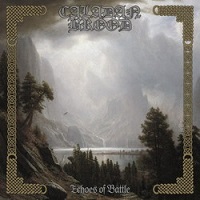 Are you one of the people who felt a bit let down by the latest Summoning effort Old Mornings Dawn, after such anticipation? [Yes! – ed.]  Have you ever wondered who would pick up the torch and embody Summoning’s unique sound to help further this rather niche area of black metal?  Of course, since I have now mentioned Summoning three times, I’m referring to their own realm of epic/atmospheric/fantasy-based black metal.  And now, our heroes Caladan Brood officially toss their hat into the ring and confirm that Summoning have spawned a legitimate successor, and moreover, with their debut album, have released something that Old Mornings Dawn would have been fortunate to resemble.

Like the aforementioned band, Caladan Brood also base their musical impetus around a critically lauded work of epic fantasy literature, not in Tolkien, but in Steven Erikson’s Malazan Book of the Fallen.  Additional inspiration for Caladan Brood’s music come from bands like Elffor, Nazgul, Lord Wind and Bathory-and video games such as Warcraft II, Diablo and the Elder Scrolls.

Musically, this duo from Salt Lake City sound a lot like Summoning.  There is no doubt about that.  But there is much more to this band in terms of broad musicality-whether in their clean vocals, more robust guitar work (see “Wild Autumn Wind” and “A Voice Born of Stone and Dust”), medieval musical elements, or the rich album production and soundscapes.

A clear contender for best epic black metal album of 2013, Echoes of Battle was released in February of this year by (apparent) newcomers who go by the names Shield Anvil and Mortal Sword.   This is one of those albums that left people thinking “Holy shit, where did this come from?”  And if you are a Summoning fan and are open to the furthering of their musical legacy, this album is mandatory.  For an album that is contributing to this (admittedly acquired taste of a) metal genre, it garners perfect marks from yours truly.  Maybe some might knock it for borrowing so heavily from another band, but it’s just too good to matter.