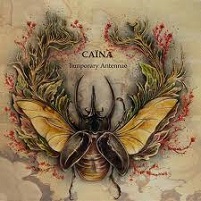 The brainchild of one Andrew Curtis-Brignell, Caina is an elusive, daringly complex combo of black metal, post-rock, and experimental that is another in a long line of bands

that have come to define the Profound Lore label. An album that certainly makes you work, Temporary Antennae is a body of work meant to be digested as a whole, for the intense sonic nature and hopeless dynamics Brignell spews forth are not easily

Gradually moving away from the post-black metal sound that 2007’s Mournerembodied, Brignell takes several leaps – some more advised than others – but always keeps that level of claustrophobia intact. The early grinding black metal shackles of “Ten Went Up Each River” and “Tobacco Battle” eventually give way to the synth-pop of “Larval Door” (think early The Cure), that is both head-scratching and numbingly brilliant at the same time.

Indeed “Larval Door” is the turning point for the album, as Brignell slowly scales down the intensity into a more focused, ambient whirl heard on the ominous “…And Ivy Wound Around Him,” which leads into the hopeful, two-pronged “Them Golds and Brass,” part indie-rock

Caina is adverse to any type of sonic restraints and while that has its positives and negatives, we see it as mostly positive, for in this day and age of polished, rudimentary rip-off metal, it’s encouraging to see someone like a Caina (or an Alcest, for that matter), stick their head outside of the box. Totally recommended.