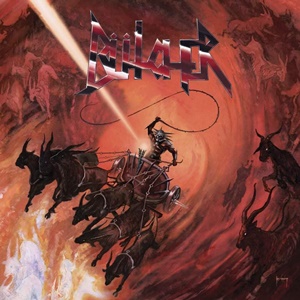 Blazing a trail with their ideal blackened speed/heavy metal cocktail, Belgian act Bütcher optimize a take no prisoners sonic output for their second album 666 Goats Carry My Chariot. There’s no mystery as to where they stand – in service of steele, the occult, and epic, over the top attitude where the execution wrenches every last drop of sweat and blood that can pour through your veins. The nine tracks present showcase a four-piece hellbent on a primal take that combines influences from heroes of the 80’s and 90’s in a variety of black, speed, thrash, and epic/traditional templates – appeasing those who shiver at the thought of any commercial aspirations filtering into the music.

A weird keyboard loop against a deep narrative bellow signals “Inauguration of Steele” – a brief 75 second intro that features a simple yet catchy layered-guitar refrain from KK Ripper before the blazing, heads down “Iron Bitch” takes over your speakers, a catchy Exciter-like effort with key Iron Maiden-ish transitions. At other times, the death knell sequences provide a brief reprieve before the next riff whirlwind and insane vocal roar takes command – where Agent Steel collides head on to Aura Noir or Venom, as you’ll hear for “45 RPM”, as R Hellshrieker embodies his insane high-pitched screams and sandpaper rapid vocal spew to match the evil proceedings. Although most of the material is very compact and focused, the title track at over nine-minutes showcases the band’s love for epic atmosphere – incorporating acoustic guitars, chanting accents, and this larger, looming feel that Manilla Road/Cirith Ungol followers salivate over, the bass playing of AH Wrathchylde adding that progressive, fluid nature to keep ears riveted while R Hellshrieker adds some King Diamond-esque textures in the right places. The band isn’t afraid to deposit a blast beat here or there to diversify the attack – everything makes sense, even as the material steamrollers the listener in under forty minutes.

Even the cover art serves the title track and what to expect as a scene from the depths of the underworld. Evil stage names, fierce output, and a love for blackened speed/traditional heavy metal done out of purity, Bütcher demand notice and deserve appreciation because they deliver integrity and passion in their music.