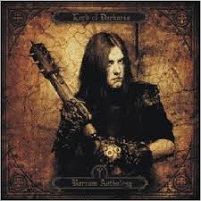 Ole Varg is still hanging around some jail in Norway, as his sentence for slaying Euronymous has been extended thanks to a failed escape in ’03 that saw our Pagan lunatic brandish a bazooka and other honing devices sure to ravage a Third World Country. Nevertheless, this is not the first Burzum compilation bearing the Anthology tag (the first appearing in late 2001) and quite frankly, this one misses the mark by a lot, begging to ask, who put this thing together?.

Culling from each of Burzum’s five proper studio albums, Anthology hits on a couple of gems, namely the mystical “Lost Wisdom,” which boasts one of Vikernes’ most grueling riffs. The epic-to-end-all-epics “Det som Engang Var” is placed smack dab in the middle of the album when it should be the first song. A 14-minute classic that builds and builds and builds via a majestic flow of melodic, but churning riffs, “Det som Engang Var” has yet to be replicated in any black metal realm.

Two Filosofem songs: “Jesus Tod” and “Gebrechlichkeit II” are included, and show Vikernes’ writing style at its peak, as both songs are a smattering of his tortured vocals and steady, evolving arrangements. The last album to feature any sort of distorted guitar work, Filosofem remains the most unheralded Burzum album, but deserves its just due.

In lieu of the many qualms centered around the song selection, Blistering has decided to come up with its own to further demonstrate how powerful a Burzum anthology could really be if formatted properly:

Perhaps Varg could be consulted next time the idea for yet another anthology is broached. Eh, maybe not. Call me.