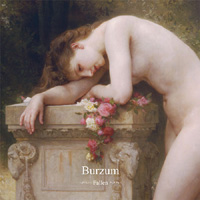 Man, Belus is barely a year old and here comes a new one in the form of Fallen. ‘Ole Varg is certainly making up for that span of inactivity related to his stint in jail, isn’t he? Essentially a continuation of its predecessor, Fallen has its share of charming, world-beating-this-is-unstoppable-black-metal moments, but also a rash of plodding, uninspired drivel, too. It’s like Vikernes is staring at greatness across the street, yet doesn’t feel like jaywalking to get there. Might put him back in jail…

As noted, Fallen picks right where Belus left off, with the two albums sounding virtually identical to each other. Riffs are repeated ad infinitum at times, sometimes coming across as resoundingly mesmeric (“Jeg Faller,” “Valen”) and other times simplistic and annoying (“Vanvidd”). Vikernes’ guitar playing has become more multi-faceted and technical, although it occasionally lacks the dumbed-down desperation of his formative years, if that makes any sense. Either way, “Valen” is easily the pick of the bunch, with a main riff (played roughly 2,000 times) that would feel right at home on the masterful Det Som Engang Var.

Clean vocals are dropped in on “Jeg Faller,” a surprise move considering how downright horrific Vikernes’ voice is capable of sounding (all in a good way, mind you). This new tone makes Fallen have the guise of folk black metal, but Varg is quick to keep things in normal firing range, specifically the clunky “Enhver til sitt,” which rolls out one of his more disco-like drumbeats. Sorta funny, when taken into context.

The frustrating thing with Fallen is that it could be an album rivaling the importance and depth of Burzum’s earlier works. You’re not going to find black metal more chilling and introspective than that, so if this album is a matter of Varg getting the cobwebs off for a future masterwork, then we’ll be patient. Heck, we waited well over a decade for a proper “metal” album from the guy anyway…