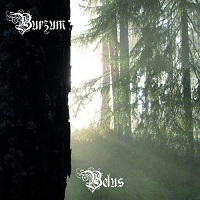 Perhaps the most aped and copied black metal entity, Burzum (rather, everyone’s favorite jailbird Varg Vikernes) finds itself in a precarious position with Belus. On one hand, it’s a welcome sight to have Burzum back, as their early output (i.e. Det Som Engang Var and Hvis lyset tar oss) are staples of the genre. On the other, it’s a bit discouraging to hear how samey and boring Belus is at times. This is no fault of Varg’s – everyone has stolen from the man, but enthusiasm should be tempered around this one.

Time has done little to tinker with Burzum’s sound, for Belus could probably be transported back to 1993 and would fit right in. Production is non-existent and Varg’s musical

skills have not progressed in the slightest, which is fine – Burzum was never about technical exploits.

For the most part, this eight-song offering has its choice moments, but a meandering opening sequence featuring “Belus’ død” and “Glemselens elv,” don’t exactly elicit a “wow, he’s really back!” response. Instead, the aforementioned numbers troll along at a listless pace, especially “Belus’ død,” which has no business being the lead off track. It’s not until the whirling, momentous “Kaimadalthas’ nedstigning” that the album gets moving and we’ll credit that a handful of some of Varg’s best riffs, most notably a quirky melodic ditty at exactly the 1:00 minute mark that is intersped throughout.

“Sverddans” recalls the driving, gritty pace of Det Som Engang Var and is a keeper, as is “Keliohesten,” which picks up on the somber, atmosphere vibe Varg was adept at back in the day. Unfortunately, the closing duo of “Morgenrøde” and “Belus’ tilbakekomst (Konklusjon)” are worth of the “Bore-zum” comments flying around the ‘net.

Belus will get more looks based on curiosity alone, although this could do more harm than good for the man, as a lot of black metal newbies have zero clue about his mandatory early albums. The fact that Varg even made another record is a feat onto itself (and the lenient nature of the Norwegian prison system), so Belus would come with the appropriate hub-bub and discussion then will probably fade into the back. That’s what 16 years in jail will do to you.