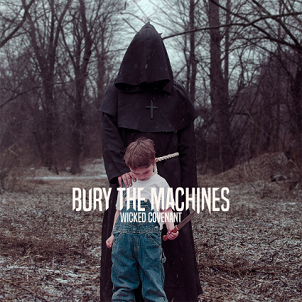 Album cover of the year? Yeah, perhaps so. It conjures up the usual cloak-and-dagger, prey-upon-the-weak element that has bogged down the Church of late, reminding us all that there’s no one you can really trust but yourself. (Okay, enough of the posturing.) The band in question, Bury the Machines, is the product of John E. Bomher, Jr., perhaps best known for his bass work in Yakuza. In effect, Bury the Machines is the utter definition of a one-man project, for Bomher isn’t joined by anyone but himself and his vivid imagination, which takes off on Wicked Covenant.

Somewhere in the post-doom stratosphere is where Bury the Machines exists, although the full immersion plunge never completely takes form. Instead, Bomher piles mounds of guitar layers on top of each other, mainly of the psychedelic variety on opener “Beneath My Wrath,” a song that eventually heads into hardened mid-tempo territory. The doom-encrusted “A Victim’s Tears” gets the nod as the best jam of the three, with emotive clean vocals working their way through a rather hazy, spatial main riff that bobs back and forth, sometimes falling into New Orleans sludge territory, but never losing its darkened angle.

The vocal crescendo (more cleans, too) that emerge at the end of “Waterweapon” are perhaps indicative of where Bomher could really take Bury the Machines. The foundational elements of the band don’t jump off the page, but the man’s various vocal tweaks and inversions are something worth clinging onto, especially if he builds more songs like “Waterweapon.” But in the meantime, Wicked Covenant is already a success based upon its cover. Bomher proves rather adept at doing it all here, making you wonder if he’s actually the cloaked dude after all…