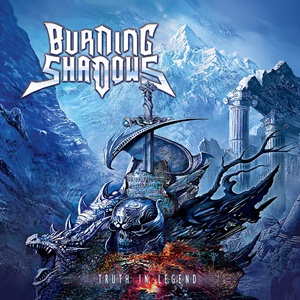 Patience and perseverance are two traits that epitomize long-standing power metal quintet Burning Shadows. Especially when performing a niche style from the United States, you want to set things up for success and not disappoint those already in the coven – thus the longer four-year wait time since the last full-length Gather, Darkness! hit the streets. Ultimately, the output for Truth in Legend exceeds anticipated expectations – as the Mid-Atlantic artists serve up eight delectable tracks of meaty power riffs, epic vocals, and numerous harmonic and melody tricks that gravitate from both European and US-oriented foundational frameworks.

Many segments ramp up the retention factor because of unison hook elements where the vocals and guitars act together for active audience engagement – evident in the chorus for “Sworn to Victory” which along with an extended Maiden-esque marching instrumental section makes for a first-half rejoiceful spotlight. Guitarists Tim Regan and Greg Jones layer their parts with passionate harmonic runs – equally adept at introspective clean buildups for the opening of “From the Stars” as they are for heavier, more epic salvos launched within the seven-minute plus title cut that showcase their love for older, Night of the Stormrider-era Iced Earth and Jag Panzer. Drummer David Spencer adds unique triple hits and semi-blast sections to opener “Day of Darkness”, contrasting the conventional mid-tempo, epic nature of the arrangement that also features cultural acoustic guitars and Tom Davy’s rhythmic vocal delivery, taking his natural Matt Barlow-esque range into Hansi from Blind Guardian propensities. A lyrical foundation built on history, fantasy, and science fiction captivates to go hand in hand with the musical proceedings – plus a JP Fournier cover painting stokes those image seekers with an eye for penetrating visuals.

Closing on the 13-minute “Deathstone Rider” that features every ideal epic want (dynamic transitions, tasteful harmonic-laden beginning, aural hooks to hang on for days, and a sing-a-long story to boot), Truth in Legend sees Burning Shadows at their most confident, striding valiantly into battle for those who love older Blind Guardian as much as Iron Maiden, just putting a US finesse stamp on the proceedings. Light the torch, don your favorite battle gear – Burning Shadows provide the ideal soundtrack to face your fears and come out triumphant. 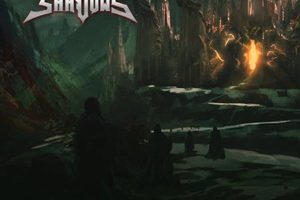