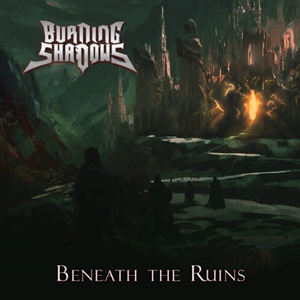 It’s amazing the resolve and passion many musicians have for a specific brand of metal despite the obstacles and battles to achieve any level of success. Take the case of Maryland power metal band Burning Shadows – active since 2000 and releasing four EP’s and three full-lengths in their career, independently sailing into the marketplace while crawling up the underground because of consistent high-quality product and understanding of their skill sets. Beneath the Ruins is the band’s latest offering, aligning with a German underground label for additional push/promotional support of this seven-song EP which consists of five studio tracks and two live cuts.

Traditional power metal with a mix of American and European outlooks comes into play when taking in these songs. Power riffs, mountaintop vocal melodies, and steady, pounding tempos are stocks in trade for the Burning Shadows style – the type of songs that inject a marching, uplifting spirit while hunkering down to gallop and battle any charging force that dares to subject themselves to the assault placed before them. Vocalist Tom Davy has that deep timbre to his delivery against a natural multi-octave ability that properly gives him comparisons to Matt Barlow and Hansi Kürsch, especially when he shapeshifts during back and forth panning for the thunderous anthem “The Red Key”. The rhythm foundation musically of the guitars, bass, and drums creates this instant headbanging nature, with supplementary guitar melodies infusing the early appeal of “Blacken the Sky”, an opener that features magnificent vocal harmonies from Tom and the band during the rising chorus. You always know with this group they love exploring history, mythology, and war-like themes, a natural compliment to the power style of their music – the artwork setting the stage as well for a transformative experience. Interesting epic/semi-blackened riff tweaks incorporated into “The Grey Company (Paths of the Dead)” prove the band is willing to experiment in spots without forsaking the heavy parts and solid musicianship on display, the lead break very fluid and emotive even if it’s quite quick.

“The Last One to Fall” and “Oathbreaker” are the live cuts – Tom ensuring audience participation at all the right moments, and the band delivering from the stage in a heavier/raw presentation, never diminishing the power metal presence they’ve delivered throughout their career. If Iced Earth from the 1990’s-early 2000’s, Blind Guardian, and the heavier side of Primal Fear mean something to you – this is another EP to gather your armor and lay down your sword to purchase. 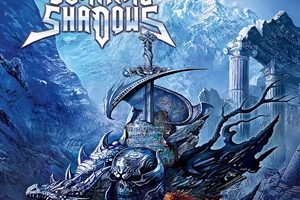